My husband and I decided years ago that we would stay home with our kids on Valentine’s Day instead of going out as a couple.  We have a tradition of doing cheese and chocolate fondue for dinner with our kids.  It is fun and the kids feel loved and special knowing that we want to be with them on “love day”.  My husband and I also decided years ago that we would switch off buying gifts/planning a Valentine’s date.  We go on a date for Valentine’s Day, but we do it on a different night.  One year I will buy a gift and he will plan the date.  The next year we switch.

This year it was my turn to plan the date and his to buy the gift.  He got me a Kindle Fire HD and a box of See’s Chocolates.  Woo hoo!  I am so excited about my Kindle and the See’s have special meaning to us (and good chocolates are just yummy!).  For our date we will be going to a steakhouse and seeing a romantic movie.  Nothing too exciting but we are definitely looking forward to it.  But I did want to do something special for him and something to commemorate our love for each other on Valentine’s Day.

So, after dinner last night we put the kids upstairs watching a movie with instructions to go to bed after it was over.  And I planned a “Spa Night” for my lover.  It was soooo fun to plan it and set it all up.  I just knew he would LOVE it.  And he totally did.  And even though it was a lot of work for me I really loved doing it for him.  I want to share what I did and how I did it.

I didn’t take pictures, but I did take these shots of the bathtub area the next morning. 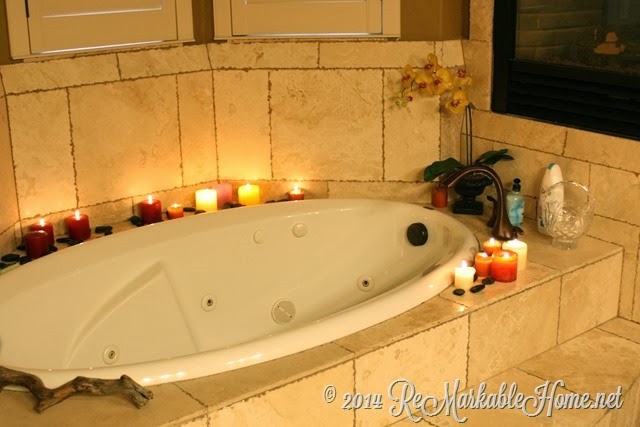 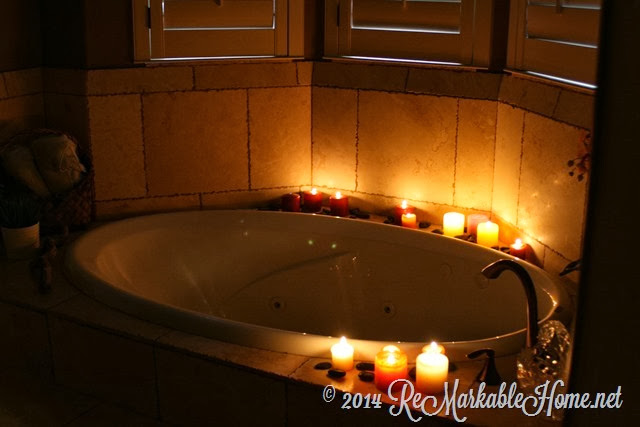 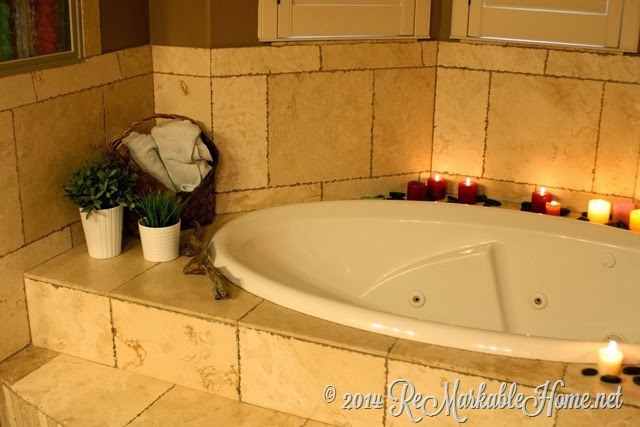 I decided the name for the Spa would be “Spa Amour”.  Amour means “love affair”. I made a sign for the bedroom door (it looks a lot better printed): 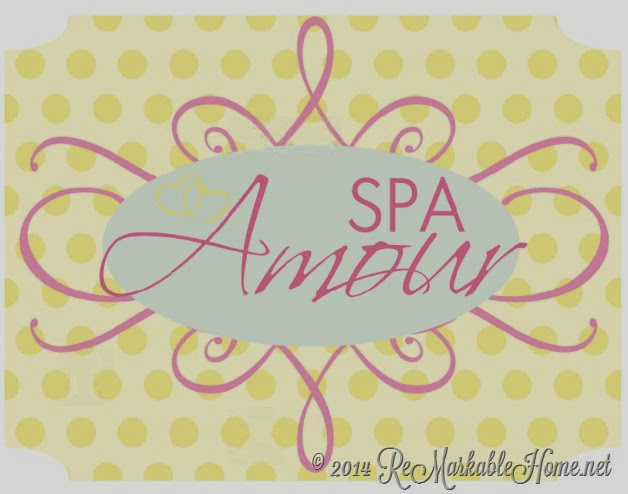 I also made up this gift certificate for him:

You Can Get These Printables HERE!

I planned out several treatments I wanted him to have:

I went out and bought several things and then gathered the rest from my house:

So, I basically gathered up my whole house!

Then I sent up our room like a spa.  You could totally do more than I did.  I didn’t want to spend tons of money.  Here’s what I did.

The room looked great.  I turned off most of the lights, had a lamp on in the bedroom, low lights in the bathroom.

Now here is what we did.

He came knocking on the door at his appointment time.  I welcomed him to the spa and spoke to him the whole night in that quiet voice people use at spas.  I kind of showed him around and then told him he would need to shut off his phone.  Then I told him he could change into his robe, brush his teeth, shave, and use the restroom.  When we was ready he should sit on the couch and start to relax and I would be back soon to start his treatments.

When I came back, I spoke to him about our spa.   I decided that it would make it extra fun and exciting for him if I told him that since Amour means “love affair” each of our treatments would end with a kiss and me removing an article of clothing. I made sure I had on the right amount of clothing so the night would end up right.

I told him his first treatment would be a haircut and I would be ready for him in a couple minutes.  I went into the bathroom and laid down a plastic disposable tablecloth to do his hair cut on since I wanted clean-up to be super quick and easy.  I got out my haircut supplies and then went and brought him in for his hair cut.  Before I started, I turned on our shower to super hot so it would get all steamy in there.  I cut his hair, gave him a kiss, and sent him into the steam shower with his toiletries and instructions to wash away the stress of the day and try to relax and to take his time.

While he was showering, I cleaned up the haircut mess, and laid out the bedroll.  I also removed my shoes and socks.  When he was done showering I handed him his towel.  When he came out I kissed him and took off my sweatshirt.  This was good because the next treatment was the body scrub and I didn’t want long sleeves on.

I had him lay down on the sheet and covered him with a big towel.  I turned on the bathub and lit all the candles.  Our tub is huge and takes forever to fill so I figured it would be ready about the time I was done with his scrub and I was right.  I added epsom salts and bubble bath to the water.  I then used a homemade body scrub to exfoliate his whole body.  You can find body scrub recipes all over the internet.  It was a bit messy but I knew I had that plastic under the sheet so it was ok.  He really enjoyed the scrub.  I kissed him and sent him into the tub.

Before he lay back I used the loofah to clean off his back.  I told him to just relax and explained how the salts would draw impurities out of him body.   I cleaned up the messy sheet and plastic from the scrub, then laid down a clean sheet for his facial which would be next.  I gave him a hand massage while he was in the tub.  I also gave him a scalp and neck massage.  I brought him the drink of his choice.  Then I told him to relax for as long as he wanted and let me know when he was ready to get out.  I went and read a magazine on our couch for a few minutes.

After a bit he called for me and I helped him out of the tub with a dry towel and a kiss.  I told him to dry off and if he was cold he could put on his robe and then lay down on his back.  But my husband is always hot so he just lay down and I covered his bottom half with a towel.  I sat on a folded blanket at his head and gave him a facial.  (I have had a few facials but also watched this video for a reminder of how it’s done: http://youtu.be/1szF5keElfg

I started with tweezing his eyebrows, then a scrub, then a cleanser, then a mask, then toner, then a moisturizer.  I used the hot towels in the crockpot to steam his face and the washcloths to clean his face.  I used the cotton pads for the toner.  He had never had a facial before and I think he enjoyed it.  If your husband has sensitive skin you might not want to have him shave before the facial.  My husband got very relaxed.  When I was almost done with the facial my kids all started fighting and crying so I had to excuse myself to go deal with them.  That was kindof a bummer, but that’s just what it is to have kids, right?  I came back and finished the facial and gave him a kiss.

Then I asked him to slip between the sheets I had laid out on the bed.  I proceeded to give him a massage.  I kept the parts of his body that I wasn’t working on covered with the sheet. I used the melted, warm coconut oil.  The scentsy warmer was the perfect things to melt it without it being too hot.  I oiled him up and then used the hot rocks to massage him.  I used my hands also.  I am not the best masseuse but I think I did a pretty good job.  I did his legs and arms and back and chest. You can use your imagination to get the full effect.  After his massage was over I gave him a kiss and told him his treatments were done.  Then I climbed up on to the bed to “snuggle” him.

It was a really wonderful night. I think he really felt loved by me because he knows I hate giving him massages!  ha ha!.  I actually really enjoyed doing it this time.  He said he loved how I kept telling him to just relax.  He loved the body scrub because he had never felt that before.

I am really glad I did this for him and while I won’t be doing the whole thing again soon I can see doing parts of it for him.  I think it brought us closer together and it was so fun to just concentrate on pampering him and making him feel good.

Do you think you could do something like this for your spouse?

I appreciate comments so much! I love to hear your thoughts or answer your questions. Thank you for taking the time to comment! Some Firefox users have had trouble commenting. PLEASE email me at remarkablehome@gmail.com if you have any problem commenting. Thanks so much!